An exhibition is inspired by Ethel Webb’s Japanese garden which celebrates the cross-cultural exchange between Britain and Japan during this period. 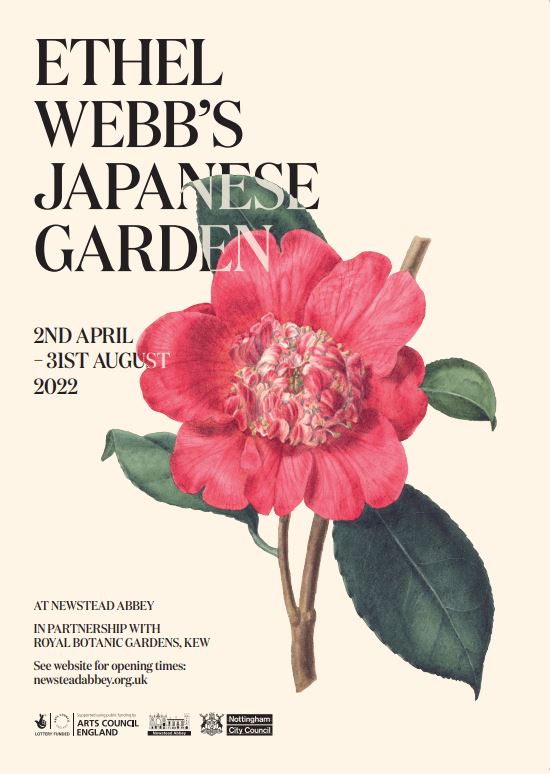 Ethel Webb was the owner of Newstead Abbey from 1910-1915 and the Japanese Garden that visitors still enjoy today was created under her direction.

Ethel Webb inherited Newstead Abbey from her sister Geraldine in 1910, who had previously inherited from their father William Frederick Webb, in 1899. The Webb family had owned Newstead Abbey since 1861 and invested much in improving both the house and gardens over the decades. Ethel Webb was a committed and knowledgeable gardener and carefully managed and maintained the grounds at Newstead Abbey during her ownership, devoting much of her attention to the Japanese Garden, which was her passion project and became her greatest legacy. For women like Ethel Webb, at this point in history, such activities were a way to assert themselves within the constraints of a male dominated society. It is said that “Webb was one of a number of wealthy Edwardian women who practised and promoted advanced garden design and horticultural knowledge; no less than global travel, it was a display of female independence.”

This exhibition features a series of botanical illustrations loaned from the collections of the Royal Botanic Gardens, Kew, alongside historical material and works from the collections of Nottingham City Museums. As well as exploring Ethel’s garden, it also looks at some of the Japanese plants that have become a permanent feature of British gardens. These illustrations by leading British botanical artists, include works by Lillian Snelling, said to be the most important British botanical artist of the first half of the 20th century. She was “one of a remarkable group of women” including Stella Craig-Ross and Ann V. Webster, who are also represented in the exhibition.

Get the latest from Newstead Abbey straight to your inbox.